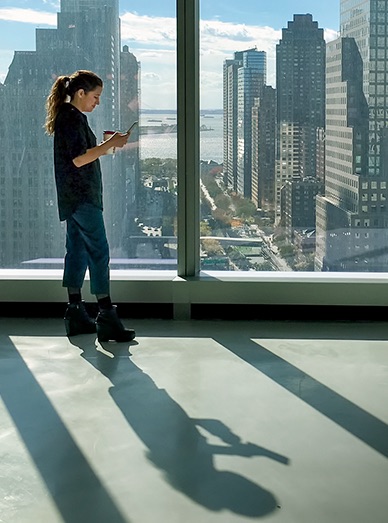 As a college student, Rachel D. Williams ’10 dreamed of working at Vanity Fair magazine. Getting there, she acknowledged, has been the result of equal parts hard work and serendipity. She completed internships throughout her Kenyon career at Art + Commerce (IMG), Harper’s Bazaar and Mercedes-Benz Fashion Week. Then, during her senior year, “I was at a dinner with some trustees and this really nice gentleman was sitting next to me,” she said. “After discussing my past internships, he asked me, ‘If you could work at any magazine, what would it be?’ I said ‘Vanity Fair’ without blinking. He said, ‘Graydon (Carter, Vanity Fair’s longtime editor) is a good friend of mine. I’d be happy to put you in touch.’” This informal dinner conversation led to an interview with Vanity Fair’s managing editor Chris Garrett — which led, eventually, to a job offer in the photo department. She has worked on shoots with Caitlyn Jenner, Patti Smith and countless other celebrities and luminaries.

A typical workday: “You’re basically doing a million things at once. You’re trying to find a location, book the catering and cars, confirm dates, look for hair and makeup stylists and work with the wardrobe stylist to help get clothing for the shoot. You’re connecting dots. I love it because I like to help creative projects evolve and grow.”

On working with Annie Leibovitz and her long-time senior producer Kathryn MacLeod: “They really dream the impossible and then we try to figure out how to make it happen. It’s such an exciting puzzle and a challenge. It asks a lot of you, but when you are in the moment and then you see the beautiful photographs afterwards, it always seems worth it. The juice is worth the squeeze.”

Fun fact: The day after attending her five-year reunion at Kenyon in 2015, Williams flew to Havana, where she worked with Kathryn MacLeod on a cover story photo shoot with pop star Rihanna. It was an unusual shoot because U.S. credit cards and cell phones didn’t work there. “It forced us to be very present,” Williams said. “We were all using burner phones and I was responsible for connecting Rihanna’s team with the photo team.”

All in the details: “Entry-level jobs are just as much about what you see as they are about what you do. When I started, I was doing coffee runs, I was down on my hands and knees picking up garbage (leftover from catering). Don’t expect it to be glamorous. Don’t be above the small things. I think sometimes just completing what may seem to be the simplest of tasks — if you can do it quietly and with sharp attention to detail — it will set you apart.”